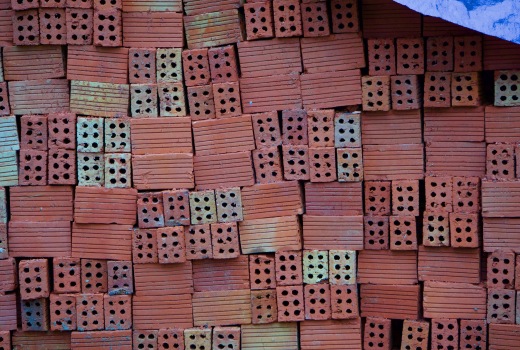 Behind every layer of cement lies a layer of red-orange (aka brick-red).  It doesn’t matter if the building is purple or fluorescent green or both (Thailand), it’s still brick on the inside.

Each new Air b-n-b includes a near by construction site allowing you to play such games as “Guess what time the crew will start tomorrow.”, “What tool makes that much noise?”, “I don’t think THAT is OSHA approved.”, and “Do you see any safety harnesses?”.

Down every street and in most driveways is a stack of bricks.  I watched a woman move an entire pallet sized pile from one side of the alley to the other.  It was a 1.5 meter move and I wondered if it actually needed to be done.  Maybe she was rearranging?

Vietnam was where I really started to notice.  Da Nang was the clear winner in the brick pile competition.  I think it’s because of their drive to become the Singapore of Vietnam.  Every patch of land along what used to be called China Beach is being built up into high-rise condos or a hotel.

I guess not much attention to detail here.  some of the letters are up some down.  It really set me off.

We even passed the brick factory on our way to Halong Bay.  Passing by a small town on the left side I marveled at the field full of neatly stacked piles and pillars that looked like a miniature city scape.  A brick Hobbiton.

Some may say that SE Asia is built on bamboo and palm fronds and they certainly use a lot of each for almost everything.  I also know I get fixated on a subject and soon I’m seeing bricks everywhere.

I rest my case with My Son. 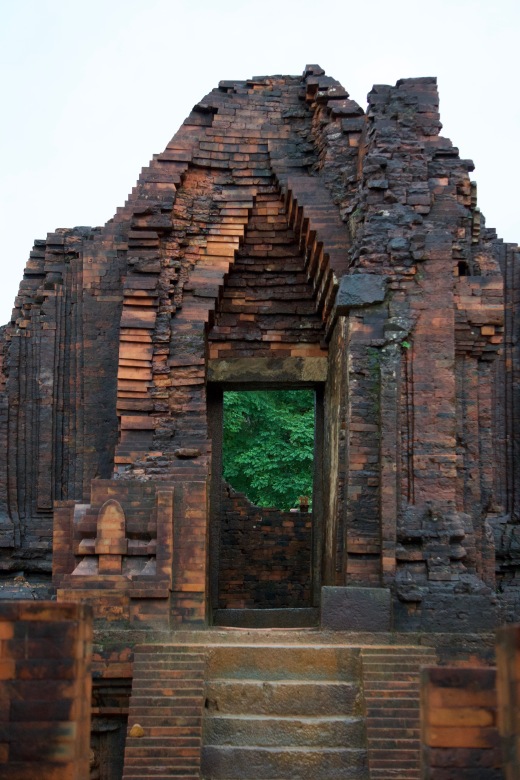 The like new looking bricks are the originals.  The black and deteriorating are the modern rebuild.

Built of brick and tree sap between 400 AD and 1400 AD the building are still standing.  Located in the jungle of central Vietnam.  Worn by moisture, weather and war,  My Son is truly a marvel in construction to this day.  Bricks layered without cement.  Stacked and set to dry, the ancient construction is not holding the moisture.  This baking of the bricks is what makes them better than the ones used for reconstruction. 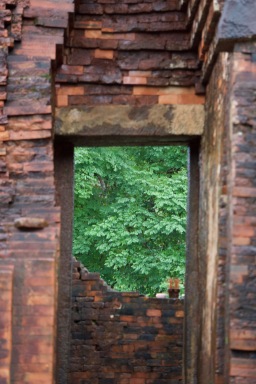 THAT’S IT!
I’m giving these TEVAS two more weeks in Cambodia and then they are history! 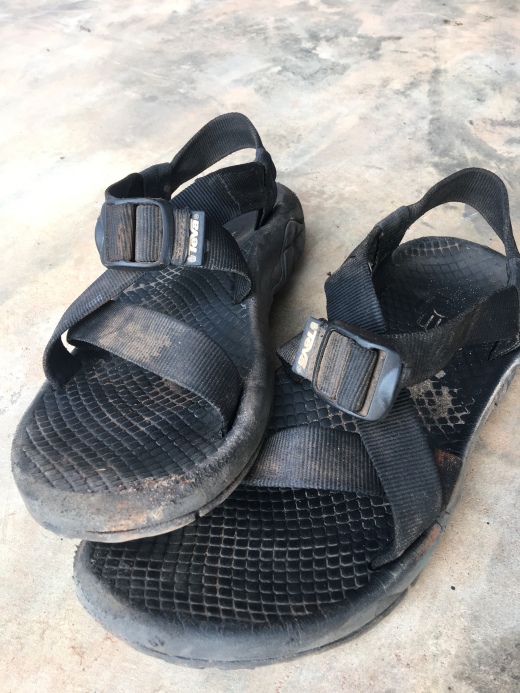 This has been my only pair of sandals.  I’m not talking about brand loyalty here.  I’m saying that this pair of TEVAS has been with me longer than I have been working in restaurants.
My friend, Josh, had a pair in high school and swore by them.  They got a lot of work in the summers of Idaho.  Waterski trips and anytime there was a lake involved they were out.  I remember wearing them while cliff jumping around Anderson Ranch Reservoir.
Sandals have come along way since 1991or 92.  More padding, leather, buckles, and what not.  I still enjoy the classic.  My straps are maxed out and I fight to get them on after my feet have swelled a bit (I’ve notice that quite a bit on the trip).

Twenty seven years!  You have got to be kidding me.  That is over half of my life!
I actually looked into new sandals before leaving on this around the world trip but couldn’t justify the expense for something I had already.  I figured I would bury them along the way.  I have confidence they will survive the next nine days.

I’ll admit this is another bizarre topic to write about.  Think of it as a love letter, a goodbye note.  Think what you will….It’s not you, it’s me.  that is why I’ve leaving.
My Native sunglasses decided to leave me in Vietnam after a fifteen plus year relationship. I even received a full replacement by the company upon request because I couldn’t see through my best lens about 3 years ago.  The glassed were around one hundred US$ and came recommended by a my sherpa friend Mingma.
Sad to see them go.
Money well spent in both cases.

Full CircleAugust 10, 2018
On this day look to the east for our return to Portland or Idaho.