The magnetic calendar on the fridge is still showing April.  It’s September now and I’m with my family at a housesitting gig on the Gold Coast of Australia.

We are caring for three cats that couldn’t be more different from each other.  One is nervous, one is yelling at us to do what we are there to do, and the third is in hiding until nighttime.

Marley is the nervous as hell.  So much so that he rubs the fur and flesh off the top of his head and paw due to a reflex he has when scared, nervous, threatened, ect…

Patrick is hard of hearing due to old age (16).  He yells for what he needs and you can never be fully ready for that meow. 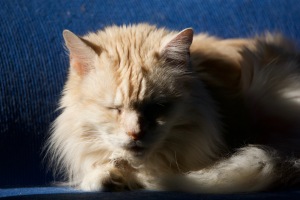 Waking to it the first morning groggy and jet lagged I couldn’t figure out what was going on. An unfamiliar house, Aussie Magpies songs and the beast downstairs.

Gracie is jet black and was spotted the first night but then hid deep in the closet for three days.   I met her on the stairs sometime in the night.  She looked like a rug and I almost stepped on her as I made my way down to Patrick who was yelling at me for something.

A day later she warmed up to me after the boys went to sleep.  skittish at first but after a few smells of my hand she was zig-zagging through my legs and using those big yellow eyes to get more petting.   Gracie is only seen three times a day, late a night looking like a man-hole cover,  early in the morning for food, and as a shadow in the late evening moving from room to room.

Ok, back to what I was going to tell you about.  On the calendar I notice an ad for a meat shop called Arundel Meats “30 years of service”.  That sounds interesting, I’ll look it up.

The search reveals the shop is an 8 minute walk from here.  I make note of it and put it in the hopper.  Going to need a bit of meat for the family meals and maybe I can offer to assist at the same time.  It’s worth an ask.

I will the car to make the left turn, from the left lane, to the left lane again as I turn into the lot.  All this while steering from the wrong side of the car.  Driving on the left is a game all played in your head.

A quick stop to check out Arundel Meats and we will be back on the route to home.  My wife and two boys stay in the car, tired from all the first day management work of getting sorted in a new country.

The shop is small with a long display case full of goodies.  I decide on carrot and onion rissoles and two chicken breasts (filets).  As Evan, the owner of this shop for 18 years (info on the their website), sets me up quickly I ask if I can stop in and assist or observe his operation over the next three weeks.  He looks at me a bit confused and I say I’m American, from the states, or if he prefers, I’m Canadian.  I’m a Chef.

Back out to the car I hop in and my wife asks me “Well, did you get a job?”. I say no, that they were full up and wouldn’t have the hours for me.  I then tell her that I was asked to come back tomorrow to assist and or observe.  She response with surprise and the boys ask If I got a job.

I explain that it is not for money but I might be given something for helping out.  I can’t help but think what a huge lesson is being taught to them.  That being present and asking for something sometimes pays off huge.  And if it doesn’t, then you are back where you were but at least you asked. 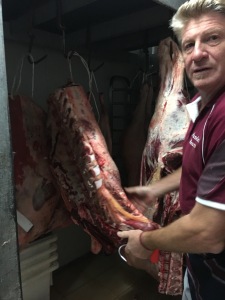 In the days that follow I staged for a few hours at Arundel Meats with Evan.  He fabricates about 6 lamb and 2 beef bodies a week.  Now there is something you wouldn’t really want to say to loudly in the states, “bodies” as in, “I will be in the coolers cutting up a few bodies for the case.”.

He generously tells me to breakdown a lamb.  He assumes that I am familiar with the bandsaw but I tell him I’m not and would prefer a hand saw if he has one.  Also, I need to keep my digits attached.

We show each other a few things.  I set up a tray of lamb rib chops and a five-rib rack all Frenched and pretty for the display case.   He shows me how he break down a beef body in the cooler and then hangs the meat to age.

Now here is the kickers. Later that week I’m picking up some lamb stew meat.  I told him I would cook up Lamb Navarin for him if he supplied the lamb.  “No worries.” he says.

During the exchange of lamb he says he saw me walking up Greenacre Drive and asks where I’m staying.  I tell him I’m in 111 and he gives me a look of disbelieve and confusion and says “No, no I’m in 111. Where are you?”.   I’m in 111 #9. He smiles and says he is in #6 and clarifies that we are talking about the same fenced in area with the duplexes. Sure thing, We are living across the street from each other.

He invites the family for a Barbie and we have an incredible night.  Singing, Conversation and the whole lot.  Lots of meat too.  Funny how that works out.  There was a salad or two as well.

Round The World! We have returned to our home. Traveled for a year. #rtw I’ll get writing again soon. #degreesofkelvin note: the route is not entirely accurate.
What a bizarre perspective. Taken from the underside is a carnival tent these seagull feet made my day. #perspective #rtw #degreesofkelvin
The Shard. 95 stories I couldn’t take my eyes off. #nofilter #degreesofkelvin #rtw #londonshard #takenfromamovingbus #iphone6
Storm the castles and take that hill! Scotland looks good on me. #degreesofkelvin #benvrackie #scotland #rtw
New Post: Unlikely in #degreesofkelvin a story of a chateau and cocottes #cocottes #lecrouset #rtw #unlikely #wpc #shortribs
World Wide Learning: New blog post! Check it out. #degreesofkelvin #worldschool #worldschooling #rtwtravel #roundtheworld
Follow Degrees of Kelvin on WordPress.com

Full CircleAugust 10th, 2018
On this day look to the east for our return to Portland or Idaho.