If it’s not the cocks then it’s the cats.

Hero,  waiting for the Let-er-iner

When I think of this week’s WordPress Weekly Photo Challenge, Awakening, I hear the roosters. 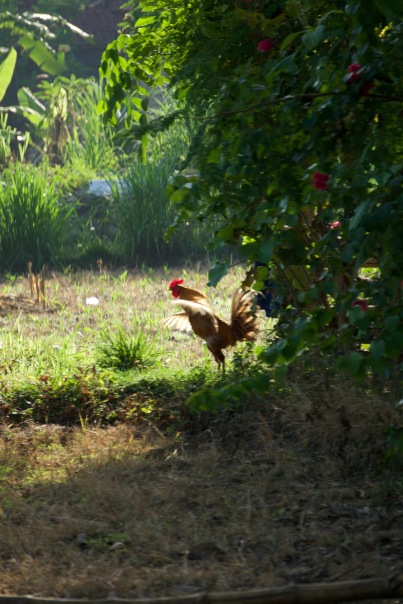 Traveling the world housesitting along with petsitting has involved dogs, cats and chickens.   But sometimes it’s not even the ones we’re watching announcing that morning has arrived or rather, about to arrive.  Those chooks could use a new watch.  At 3am the sun is NOT about to come up.

As for the cats.  I’ve always attracted cats.  We have one and I am the feeder, the let-er-outer and the..well just repeat those titles as many times in the day as you can.

In Australia we met a cat I mentioned him in another post titled Happenstance.   His name is Patrick, he was an old male that had the power to startle a middle-aged heavily snoring male straight out of bed wondering and saying “what the hell was that?”.   He has since passed on but I won’t soon forget his roar.

I’ve been using these weekly challenges to push me to write.  Thanks again,

Round The World! We have returned to our home. Traveled for a year. #rtw I’ll get writing again soon. #degreesofkelvin note: the route is not entirely accurate.
What a bizarre perspective. Taken from the underside is a carnival tent these seagull feet made my day. #perspective #rtw #degreesofkelvin
The Shard. 95 stories I couldn’t take my eyes off. #nofilter #degreesofkelvin #rtw #londonshard #takenfromamovingbus #iphone6
Storm the castles and take that hill! Scotland looks good on me. #degreesofkelvin #benvrackie #scotland #rtw
New Post: Unlikely in #degreesofkelvin a story of a chateau and cocottes #cocottes #lecrouset #rtw #unlikely #wpc #shortribs
World Wide Learning: New blog post! Check it out. #degreesofkelvin #worldschool #worldschooling #rtwtravel #roundtheworld
Follow Degrees of Kelvin on WordPress.com

Full CircleAugust 10th, 2018
On this day look to the east for our return to Portland or Idaho.